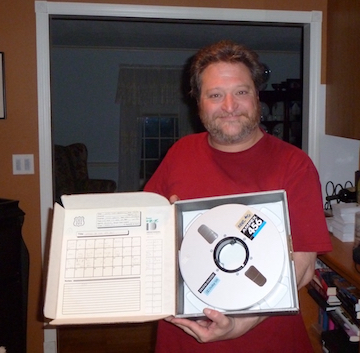 Hi All,
My initial exposure to Jewel coincided with the dawn of the internet and was in large part thanks to a friend that I’d eventually meet online - Neal Copperman.  During March and April of 1994, Neal was a regular at Jewel’s Thursday night InnerChange Coffeehouse performances in San Diego and was intrepid enough to record several of them on his walkman cassette recorder.
I was a 35 year old sound engineer and music archivist at that time, who believed (and still believes) that the most expressive instrument of all is the female voice. Through Neal’s lo-fi recordings, I became enamored with the voice of this 19 year old folksinger and became determined to hear more. Although many of her early songs were amateurish, two in particular, “Amen” and “Nicotine Love,” conveyed a depth well beyond her years. I found the contrast between Jewel’s hyperactive and often hilarious stage presence and the deeper dark songs she was writing utterly infectious, and that was largely responsible for leading me down a path I never could have expected.
As an active participant in early online groups focused on live recording and through my own adventures as a live sound engineer, I was well connected to other sound personnel and live recording enthusiasts, so I put the word out that I was searching for any live recordings of Jewel. Much to my astonishment dozens of people got in touch - many of them sound engineers who kept conveying similar experiences. The common response was “I recorded Jewel (at my local venue), but the first couple of songs are missing.”  I heard this repeated again and again and the explanation was inevitably along the lines of “I was mixing that night and had never heard of her. After two or three songs, I realized she is something special, so I popped in a tape and recorded the rest."
Within a few months, I had tracked down dozens of high quality live recordings and my perspective on Jewel broadened way beyond the songs on “Pieces Of You.” The big take-away was that unlike most artist’s first albums, Jewel’s debut only represented a small fraction of her songwriting catalogue and if she continued being so driven (which she would), she was destined for career longevity and her albums would only ever represent the tip of the virtual iceberg.
By early 1995, the compulsive archivist in me compelled me to get in touch with Jewel’s management, offering to send them everything. I also conveyed that due to Jewel’s prolific nature and because I found her infinitely better live than on her album, they should consider recording every performance.  One thing led to another and before I knew it, I was asked if I would be willing to help her by managing such an archival project. I had little idea what I was getting myself into, but needless to say, I agreed.
Since that time, I’ve worked with many musicians and have had the privilege of serving as chief archivist on a wide variety of high profile archival projects. One of the most satisfying aspects of this work is when I discover triumphant moments that have never been seen or heard before. With that in mind, I thought I’d share some previously unseen footage from the summer of 1996, when Jewel was invited to open a tour for Neil Young and Crazy Horse - a daunting proposition for any aspiring singer/songwriter. The footage is from the 11th of 13 shows opening for Neil and just a week after the Madison Square Garden gig where he imparted some timely backstage advice to a petrified Jewel. As she conveyed in a Rolling Stone interview the following year:
“I was so nervous about playing Madison Square Garden with Neil, I told him I didn’t know what to do.  He said, ‘Jewel, it’s just another hash house on the road to success. Show it no respect.’”
This footage captures Jewel a week later at Nissan Pavilion in Washington, DC, connecting with another enormous Neil Young and Crazy Horse audience. She does it by sheer fortitude, singing as if her life depended on it, while beating the shit out of her blue acoustic guitar.  The song is “Deep Water,” which three years later would become the lead-off track on her Spirit album.  It is sourced from a capture of the projection screens and while the audio is just an ambient recording (from the camera microphone), it conveys the atmosphere of this pivotal moment in Jewel’s career quite well.
I just turned 60 a few days ago, but I’m very much the same person I was half a century ago - a kid obsessed with recording and sound equipment, with a boundless appetite for music - especially live music. And Jewel and I have been in each others orbit for 25 years now. I feel blessed that I’m still around at all, but I feel most fortunate to still be working closely with such driven artists and that fascinating archival projects are still finding their way to me.  May it continue until the day I die!
I hope you enjoy this little flashback to another remarkable moment in Jewel’s career.
-Alan Bershaw
Skip to top