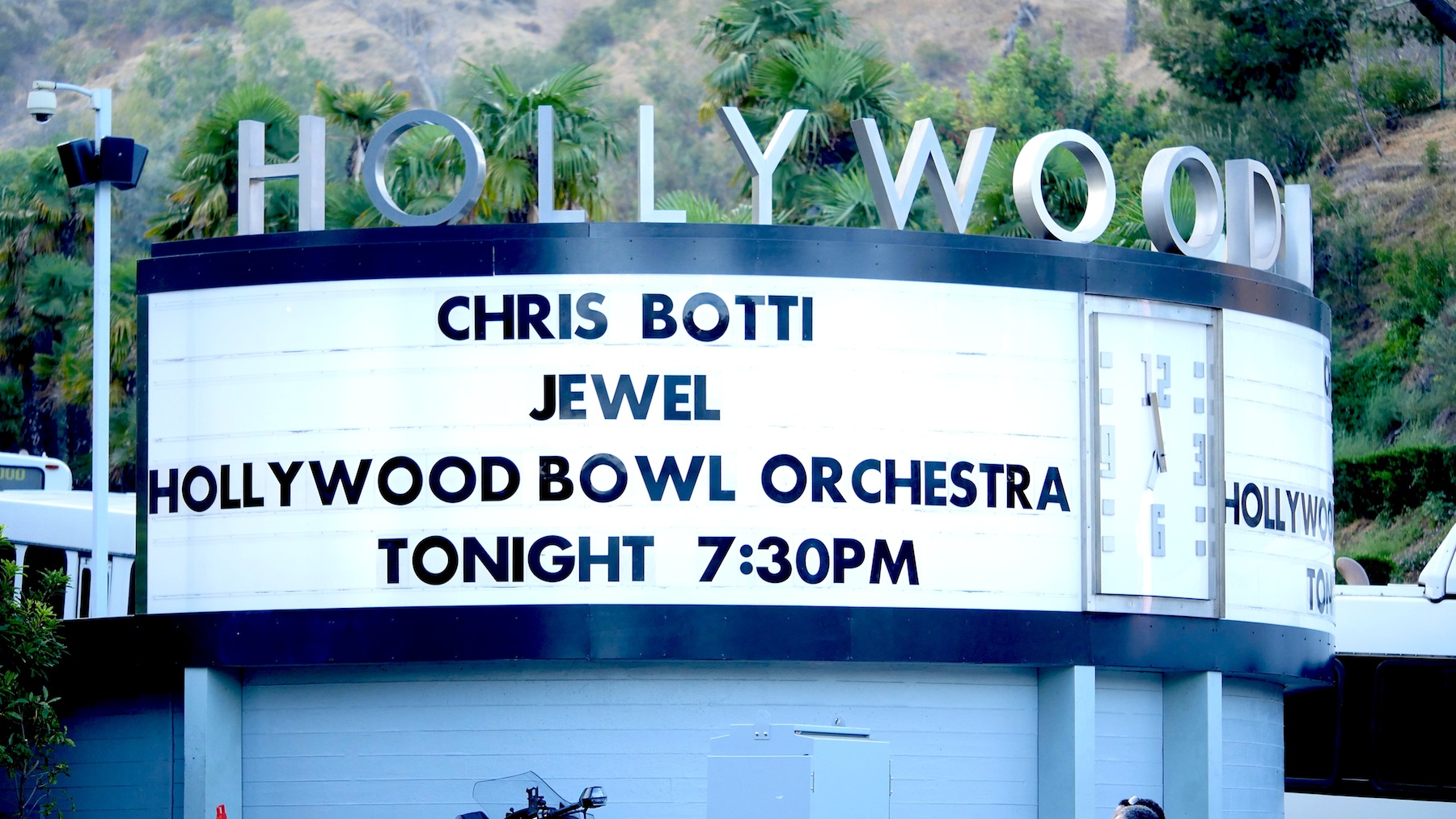 I recently got to do a performance at the Hollywood Bowl.  I was really excited as I grew up doing standards and learned to sing by listening to Sarah Vaughan and Ella Fitzgerald and so many great vocalists.

I wanted to do some standards, which are always daunting, as I have a healthy respect for the great vocalists and one should never do a standard unless they are willing, or feel able, to meet or exceed the bar they set, and bring your own interpretation to the song.

Knowing that puts a lot of pressure on you as a singer.  I really wanted to deliver and do a great show.

I had two things working against me - one is that I would not be able to hear the arrangements of many of the songs until days before the show - and second is that i got a really bad case of laryngitis!

The set was a mix of my music, and a few select standards - some of which I was singing for the very first time. Quite nerve wracking to debut a standard at such a prestigious venue and in front of such esteemed musicians as Chris Botti, David Foster and others.

Standards I have done before, but with new arrangements, were "Over the Rainbow" and "Summertime."

I did "Blue Skies" and  "I Get Along With Out You" for the first time.

The other thing that makes these types of shows difficult for me, is that I don't read music or count music. I have always “felt” music and have had an emotional and intuitive approach to writing and singing.  I may not know the names of chords, how many bars are in an intro or during a solo, but as I write and sing, I feel and hear lines. This works great when you are alone on stage and writing your own music… or even when you're with a jazz ensemble who is trained to listen and improvise.  But when a full orchestra gets involved, so must a chart or a “blueprint” that everyone follows - a score.   All the musicians see a perfectly designed map which to follow - but all I see is a box… that looks rigid…  all squiggles and lines and jibberish.  A box I don't really enjoy or understand how to fit inside. My life has been outside the box, typically.

I'm a bit of an odd duck. Many singers like a plan. They practice and stick to a plan.  I'm the opposite. I like no rigidity.  I like to feel the moment and to find my way into the emotion and find the truth of the song as it happens and unfolds before me in real time. I like the higher stakes, the risk, as it usually lends itself to a greater potential outcome... or failure... but I like the win big/fail big opportunities.  They make me come alive.  I trust my ability to improvise and feel into a song.  But give me a rigid plan that takes counting bars before entering and I get a bit paralyzed.

I have done a few symphony shows before, and I felt stiff, self conscious and like I did not sing to the best of my abilities.  For this show I was determined to have a different outcome.  And to show my range as a singer in a way I have not before.

The trick for me with this show was that I wanted to show my technical ability as a vocalist by doing these songs and this set with an orchestra, but also stay relaxed and know the framework of the score, so that i could confidently lead the orchestra should i want to hold a note out or go “off page.”

That meant getting to know the arrangement, where I might veer away, and letting the conductor know how I worked as well.  All of this was supposed to happen while practicing the day of the show - with laryngitis!

Not being able to sing during my one soundcheck and test run was very unnerving. Not knowing if I would have a voice that night was also unnerving to say the least.

I took some steroid pills to bring the swelling in my throat down, and hopefully timed it right for performing, but wasn't allowed to sing during soundcheck or really open up and see where my voice was at in the keys and arrangements, much less assess how it felt in general and how badly it was effected by the laryngitis.

A friend, Frankie Grande, happened to reach out and I told him about my predicament and he suggested I do some pure adrenaline dripped onto my vocal chords - sounds crazy, right!?  I looked into it, and it was safe, and only lasted an hour, so I had a doctor come out and I tested it out about two hours before the show, to see its effects.  The test seemed good, other than a very dry mouth, and so I decided to do it again for the show.  What I didn't know, is that while it brings swelling down on your vocal chords, it can make your heart race - which can effect your singing in another way.  I went side stage, still not having sung fully yet, uncertain of what notes I would have and what ones would be missing. Then, all of a sudden my heart feels like its leaping out of my chest and I'm starting the set a capella. A capella means there is nowhere to hide a heart that is racing so hard you can hear it when you hold a long note with no vibrato. 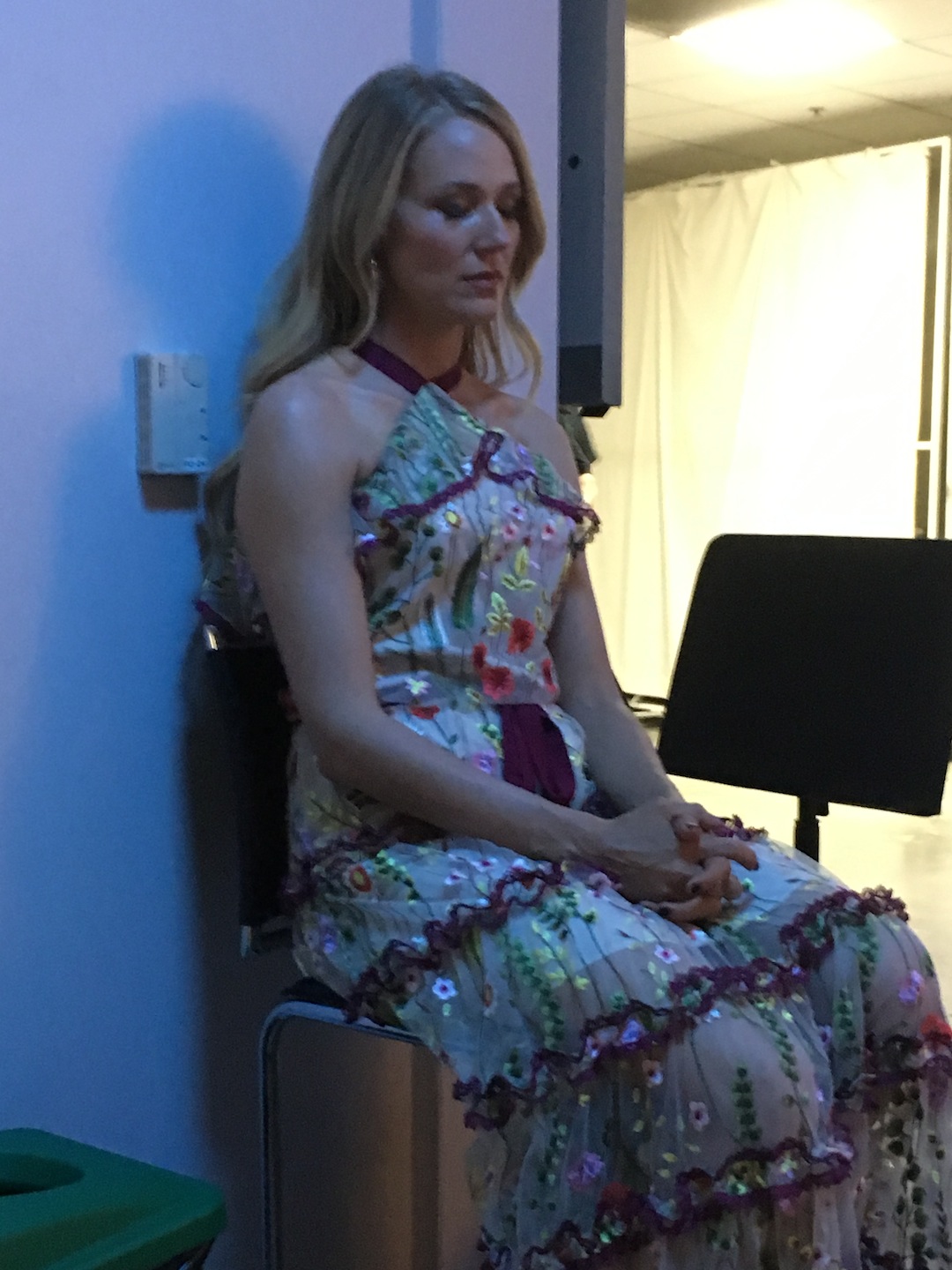 This is where I'm glad I meditate. I stole two minutes and closed my eyes and tried to get my heart to slow down.  It was to no avail.  But, my nerves felt calm. I was relaxed.  And I was ready to go out there and see if I flew or flopped.  I had no idea which way it would go - but I was ready for the adventure.

I found my way into "Rainbow", and as the orchestra entered I reminded myself to stick to my own sense of timing and that the conductor had said he would follow my feel.  So I stayed strong in my interpretation and relied on the fact that I have sung this song for 20 years.  It takes that long sometimes to find your own shape with a song. The high note was fast approaching which would require full chest voice, and I opened my throat and asked for the note, and there it was! Thank heavens!  But i had to remind myself not to go all out, and that there was still an hour of singing to do on what are basically sprained vocals chords whose pain was masked my medication.

Then we tackled some of my songs with new arrangements - done by the talented lovely Chris Walden.

"Enter from the East" has huge range and required some massive vocal jumps, but I so enjoyed revisiting this song and lyric - and the arrangement matched the mystery and sultry nature of the song.

Between songs I sucked on glycerine lozenges trying to mitigate the horrible dry mouth I had from the medications - which can make singing hard in its own right.   Dry vocal chords don't move as well as lubricated ones.  But dry non-swollen chords are better than swollen ones any day, so I did the best I could with what I had, relying on experience and patience and tone rather than brute force and volume.

Soon it was time for a brand new song, "Blue Skies."  We decided to do a half-time verse and double-time bridge feel. I soon lost myself in the music, let everything go, and woke up in the technicolor world of SONG.  Pure play.  Like a child in magical gardens, I was smiling with delight as I listened and as the orchestra followed. 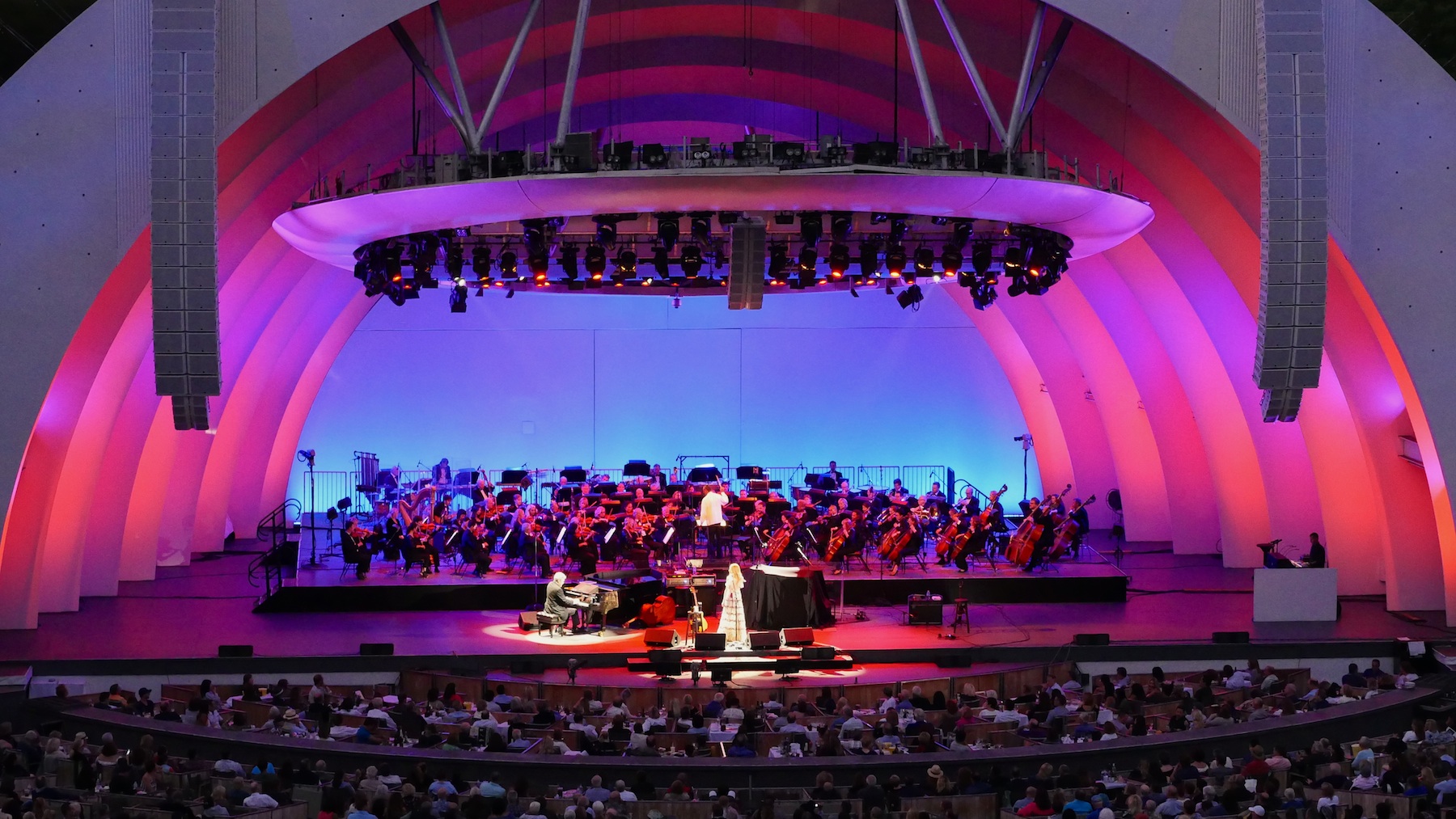 The next standard was "Summertime" - a song I have sung in bars, but not with the original and classic arrangement written for it. I decided to bring both worlds together - a blues approach and veering off the melody to allow the lyric to come alive and my voice to gain some purchase. I was near the end of the set, and so could afford to take some risks and let my life stretch out. Hearing the melody lines I planned inside the classical arrangement was hard, but I found my way to the notes I wanted to carve out and bring the shape to life.  It was heaven.

"Intuition" and "Soul" got reinterpreted and it was so fun to lend drama to these songs.  Chris’s arrangements were wonderful.

For "Who Will Save Your Soul," the orchestra started a bit fast, so rather than limp along, I decided to stop them and ask them to start a but slower.  I wanted the audience to have everything I had, the best of what I had, and I needed a slower tempo to get it done and dig in to the lyric. The conductor was kindly obliging.

At the end I was treated to a warm standing ovation and then waited for my encore with Chris Botti at the end of his set.

I learned a lot about singing by listening to trumpet players.  They have tone, sustain, and breath control - pure shape and tone - and that is what I have aspired to do as a singer.  Chris is remarkable with tone and breath and originality of notes and interpretation of a song.

We did "My Funny Valentine." It was Chris, his piano player and I. And his pianist was insanely educated and jazzy and was so abstract in the melody structure that I honestly had no idea where we were in the song!  But I knew they had my back, and so for the first time ever, I sang the song and they followed me.  I let myself feel the emotion and tried my best to let it all fly and leave it all on the stage.

I was thrilled my voice held up. I was proud I was able to relax and for the first time really sing to the best of my ability, choosing and executing the shape of the song I saw in my head.  And I felt like for one brief moment my heroes were watching me - Sarah Vaughan, Nina Simone, Ella - and I did my best to make them proud.

I can't wait to do it again!

Xoxo  Jewel
(We are not in the business of fighting the darkness. We are farmers of light.) 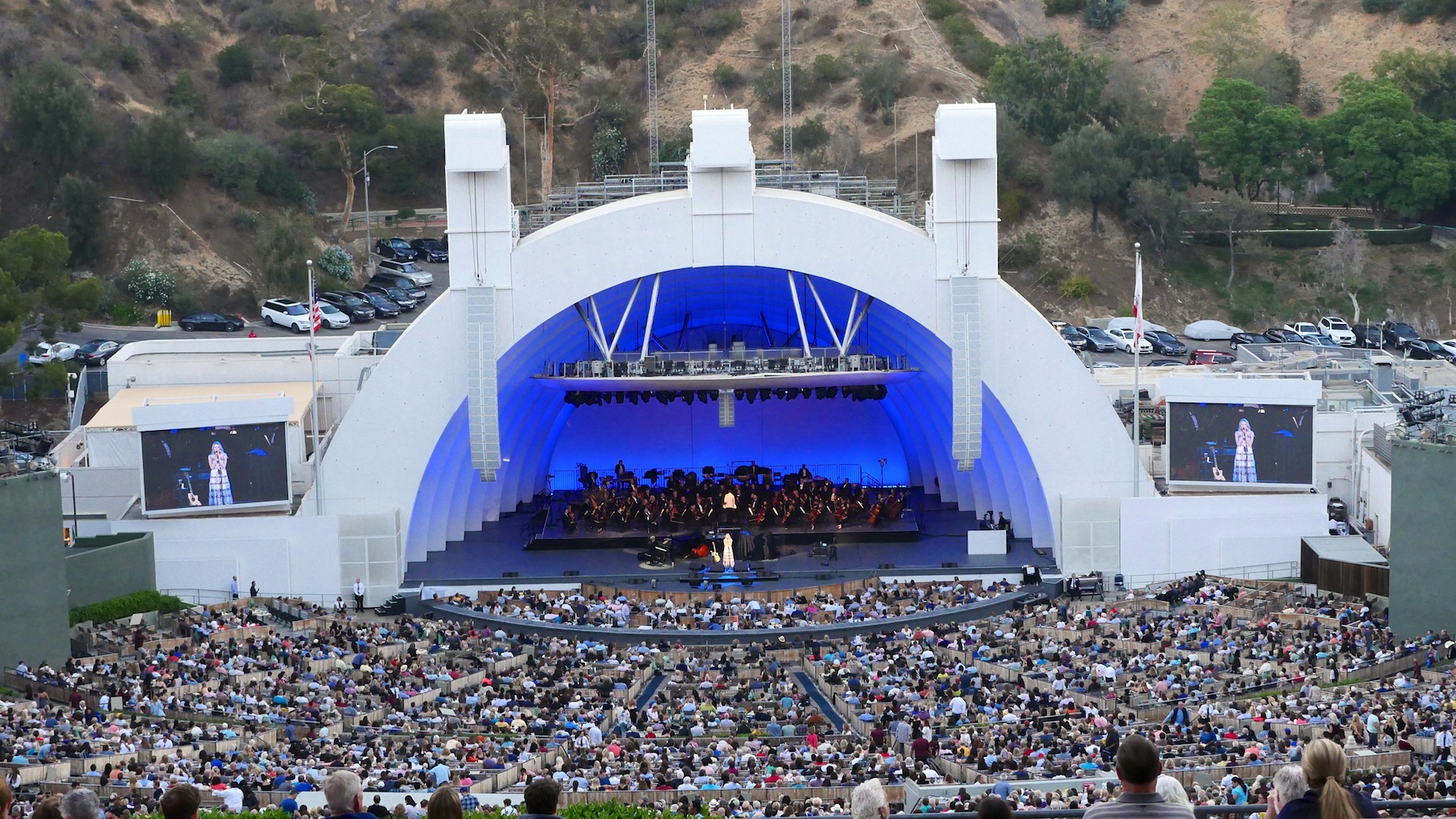