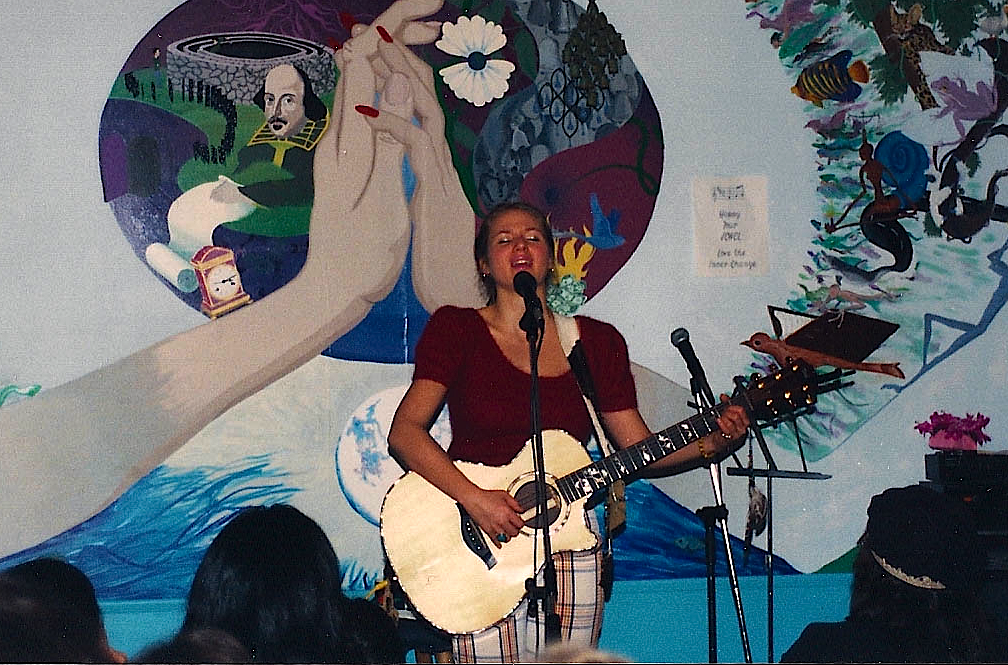 Hi again all,
We’ve shared hundreds of live recordings with you over the years and in August of 2009, we shared one of the oldest audios dating back to a 1993 performance of “Sov Gott (Sleep Well)” at The InnerChange Coffeehouse in San Diego. Jewel had just turned 19 at the time, was living in her van and just beginning her Thursday night residency there - hoping to build up a following.

Since its been 10 years since we shared this vintage recording and those were the pre-social media days of requiring a website login to access it, I’m thinking many of you may have missed it or never had a chance to hear this one. Here’s my original blog, which delves into the genesis of this unique song, plus some relevant history, with the audio following:

Despite being one of Jewel’s oldest songs, "Sov Gott (Sleep Well)" didn’t get an official title until the 2009 "Lullaby" album sessions. For all those years in between, it was more commonly known as “Dolphin & Wolf” or simply the “Swedish Song.” Since the very beginning this song has captivated audiences in a manner that is unique. In a way, it was a precursor to Jewel's approach on "Gloria," in that she diverts one’s attention away from any specific meaning in the lyrics, allowing listeners to more easily focus on her voice as an instrument. "Sov Gott" is a very simple folk song, but it has always had a mesmerizing and tranquilizing effect on audiences.

The song was originally conceived during a road trip from San Francisco to Colorado when Jewel was 17. To help pass the time constructively, she decided to have her traveling companion teach her some rudimentary Swedish, starting with the alphabet and random words and phrases that interested her. When she learned several words and phrases (kiss, dolphin, wolf, sleep well and I love you for all time), she began writing a new song utilizing what she learned as the lyrics. The result was "Sov Gott," a simple fable where a dolphin has the misfortune to fall in love with a wolf.

As Jewel explains it further:

The ill-fated love can never be realized by the animals from two different worlds, so each night they decide to meet at sunset, and wish each other good night and sleep well, and they kiss (OK, touch noses) at the shoreline, declaring eternal love. After they meet at sunset and touch, they also proclaim that tomorrow, "morning wakens when we kiss."

This song was among the first demos Jewel recorded after settling in San Diego, shortly after her 18th birthday in 1992. She attempted officially recording it several times, both during the Pieces Of You sessions in 1994 and subsequent 1995 and 1996 studio sessions, but it wasn’t until the concept of her 2009 Lullaby album that she finally recorded it to her satisfaction - not to mention it being a perfect fit. “Sov Gott” was primarily a live repertoire fixture during her coffeehouse era, and has been infrequently performed since then. Over the past decade or so, she has only performed it on very rare occasions before the most attentive and respectful audiences. Despite its simplicity, “Sov Gott” remains one of Jewel's most hauntingly beautiful songs and one that displays her remarkable vocal range, especially her upper register.

The Lullaby album recording is Jewel alone, just voice and acoustic guitar and the same goes for this 1993 live recording. Other than a slight lyric addition to the end of the album version, Jewel also changed the fingerpicking pattern from classical quadruplets to a more mellow and relaxed pattern, which she felt suited the mood of the song better. Regardless of the album version being an infinitely superior vocal and performance, I think you’ll find this raw embryonic version intriguing. It not only captures “Sov Gott” in it’s freshly written original state, but it will give listeners a sense of Jewel’s voice, rudimentary guitar playing and her personality at her earliest gigs in San Diego, when she was living in her van and literally singing for food money.

In addition to the audio, Jewel’s handwritten lyrics also follow - which contain a Swedish/English translation for anyone interested in that. Otherwise, here’s a 19-year old Jewel performing “Sov Gott” live at The Inner Change coffeehouse in San Diego on June 24, 1993.

Until next time, Alan 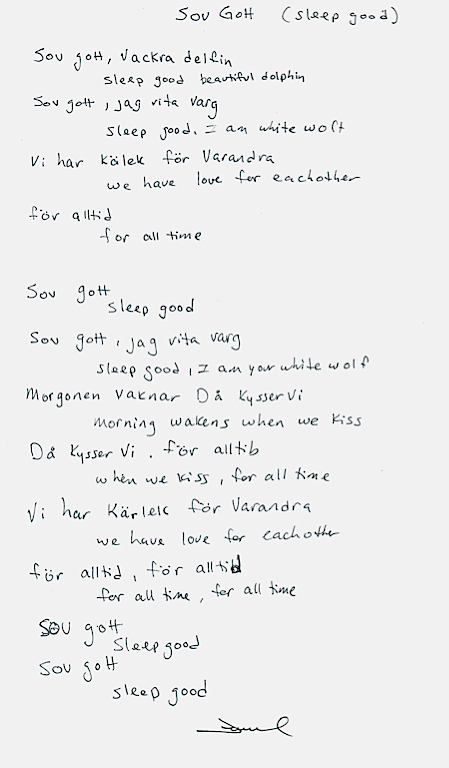