Ever have one of those dreams where the timeline and compartmentalized facets of your life seem to dissolve away and people from your past and present are morphing into the same dream?  That's the feeling I often had during Texfest weekend, but unlike a dream, it was actually happening and there was nothing disconcerting about it!   A similar feeling occurred back in 1996, when a few hundred of Jewel’s North American online fans (AKA EveryDay Angels or EDAs) first converged in the Catskill Mountains for a free private concert event called Jewelstock.  Performing before many of her most knowledgeable hardcore fans for the first time, Jewel delivered one of the longest, most unusual and ultimately most compelling performances of her burgeoning career up to that point.  This event inspired nearly everyone who attended, solidified many long-term friendships and and has since reached a sort of legendary status and deservedly so.

However, in my opinion, Texfest surpassed even that event and I’ll tell you why I think that is.  First, not only were EDAs from all over the planet invited this time, making it more of an International event, but now 15 years later, several generations of EDAs were converging.  Texfest also required far more work and planning than any previous fan event that Jewel has ever done and to see it all come to fruition was ultimately a more satisfying experience.  But it goes beyond that for me, as TexFest was also the culmination of three years of focused teamwork. Fueled by Jewel’s long-term career vision (which you can read in her own words here), her team tackled daunting challenges and its questionable whether any of it could have happened without Virginia Davis.  Let me explain...

It’s no secret that beginning back in 2003, following a management change,  five years would go by where Jewel’s online communication, her web site and our relationship with the EDA community was neglected. In fact, when Virginia became Jewel’s manager years later, Jewel’s relationship with her online community had reached an all-time low and I had retired from all communication since the JeweLink newsletter was terminated back in 2003. Fortunately for all of us, Virginia had a true grasp of the situation and was determined to help Jewel turn things around.  More importantly, she understood Jewel’s long-term career vision of not working exclusively with major labels and her desire to release more projects, more often and to do much of it independently. It was Virginia’s grasp of Jewel’s long-term goals and her respect for the EDA community that has brought us such a long way since.  With Virginia’s hard work and guidance, Jewel began pursuing direct communications via social media, we began revamping her ailing web site and I can say without reservation, Virginia was the primary reason I came out of retirement in terms of interacting again with all of you.

Virginia’s leadership and thoughtfulness in regards to The EDAs is also responsible for making TexFest such a positive experience.  This includes obvious things like coordinating the venue, pursuing discounted lodging for invitees and tackling all the daunting logistics of doing this event, but there are many other less obvious facets, like designing the TexFest t-shirts with everyone’s names on the back and providing every attendee with a free autographed laminate. Virginia is directly responsible for these little personal touches, as well, not to mention pursuing the live webcast, facilitating the audio recording download for you and for making the Texfest Yearbook available so that everyone, even those unable to attend could experience this event, even if it was just vicariously.  There were numerous other things as well, but in regards to Jewel’s online community, I’ll relay exactly what I thought when I first encountered Virginia a little over three years ago.  Following years of frustration about the state of things, I distinctly remember driving home that night thinking to myself...

That said, I should acknowledge several others on our little team, who also worked tirelessly on this event for months, including Virginia’s staff, Whitney and Emily, who coordinated invitation signups and RSVPs, along with many other facets of the event, Jewel's assistant Amy, who among other things, single-handedly prevented me from going insane during the preparation of the lyric reference book that Jewel used onstage at TexFest, tour manager Keith, who coordinated all our travel arrangements and Jewel and I,  who I can assure you have never devoted so much time and effort preparing for any concert.

In terms of the actual concert,  I also have to say a massive amount of credit goes to Adrian, Jewel’s soundman.  Adrian not only brought in a superior console to what the venue had available, but he actually delivered three separate mixes simultaneously - one to the P.A. system, another separate matrix mix to me for the recording and webcast AND mixed Jewel's in-ear monitors.  Adrian did all of this with no soundcheck and only three hours to get the system up and running and to get all of us what we needed!  There's no question he was the MVP in terms of the concert  and how well everything went from a technical standpoint.

The staff at the McKinney Performing Arts Center were also great and many worked voluntarily to help us pull this off.  It was also wonderful to have West Kennerly on board photographically documenting the concert.  In terms of the TexFest Yearbook, West is responsible for capturing the best images of Jewel onstage, all the backstage photos and of course what is destined to become the iconic image from this event - the incredible panoramic group shot with everyone in it.  Everyone who enjoyed the webcast also owes Phillip Nelson at NewTek a round of applause, as he volunteered to help us just days before the show and then did a bang-up job pulling off the webcast at the last minute.

There are also many EDAs who went above and beyond to make the weekend such an enjoyable experience for everyone, starting with Dave McGovern, who was the pointman and coordinator for the EDA picnic on Saturday.  There was also veteran EDA Gerrit Kruidhof, who despite missing the signup for the concert, voluntarily flew in to prepare such delicious food for everyone.  A huge thanks to them both!  Also thanks to Mary Bugella, who designed and created that incredible card that went along with the collective EDA gift (also coordinated by Dave) that was presented to Jewel onstage Sunday night on behalf of all The EDAs.  There were also many talented EDA photographers who shot images during the weekend and at the show.  Several of them graciously contributed images to the TexFest Yearbook and if online evidence is any indication, have made TexFest the most photographically documented event of Jewel’s entire career!

There were plenty of other EDAs who contributed to the success of the weekend, too numerous to mention and we appreciate every one of you!  In fact, our biggest thanks goes out to everyone who attended, because it was your enthusiasm, cooperation and friendliness that made this event so unforgettable. Its amazing that such a diverse group of people from all walks of life could all contribute to such an experience.  Just the simple fact that in this day and age, all of you kept the venue location for this private concert a secret all that time says plenty.  That in itself contributed to the concert being such a comfortable experience, especially for us, and we appreciate it!

TexFest also provided another opportunity for me to spend time with many of you and although I eventually lost my voice from nonstop talking all weekend, it held out just long enough to croak out Dave’s introduction prior to the EDA gift presentation to Jewel Sunday night.   Getting to know many of you better and connecting faces with the names that I’ve known virtually for many years was certainly one of the best aspects of TexFest for me.  I think many would agree.  Once again, many virtual friendships were forever solidified by face to face encounters, as I knew they would be.  It was so enjoyable to see the EDA community spirit alive and well and to encounter a whole new generation helping to keep it that way!

Before I wrap this up, I should also mention Jewel, as she certainly delivered one of the longest and most compelling performances of her career.  Even though we worked extensively preparing rare material for this show, I still had no idea of exactly what she’d end up playing or for how long, so this performance remained just as spontaneous for me as it was for so many of you.  Despite being rusty on guitar on some of the obscure songs, not to mention 7+ months pregnant, she was in fine vocal form all night and displayed incredible endurance, playing far longer than anyone (including us) ever expected her to.  I can also say Jewel has rarely been consistently funnier than she was that night.  I’m convinced that the intimate venue and having so many hard-core fans in the same room was largely responsible for so much spontaneous hilarity over the course of the evening.

Having closely observed Jewel’s performances and audiences for many years now, I know how profoundly the nature of any audience effects Jewel’s performance.  TexFest was no exception and you were an example of what I consider the perfect audience.  There was plenty of interaction, even more so than any typical audience, but the difference was during the songs, as all of you were so incredibly attentive and quiet!  That unquestionably had a major positive effect on her performance and it was pretty obvious Jewel was giving every song her all.  That she could maintain that kind of focus for nearly three and a half hours solid was a direct result of such a respectful and attentive audience.  I could go on about all the rare, vintage and previously unperformed material, but everyone who still wishes to hear it should get the download and listen for yourselves. I can assure you that listening to it is far more enjoyable than any written account could possibly be, so I’ll leave it at that.

Suffice it to say that TexFest exceeded my expectations.  I’m thankful to have been a part of it and I’ll never forget it.  I loved West’s panoramic group shot of everyone in the TexFest Yearbook so much that I had it blown up and now your smiling faces are now permanently looking back at me from the wall in my office (see below.)

I’ve said it before, but I’ll say it again... My life has definitely been enriched through my interaction with The EDAs, which I consider to be the most thoughtful, intelligent and just plain friendly fanbase on the planet.    Alan 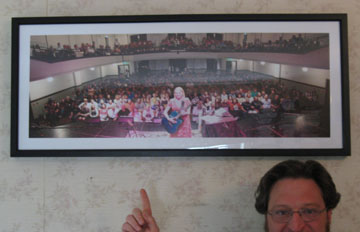