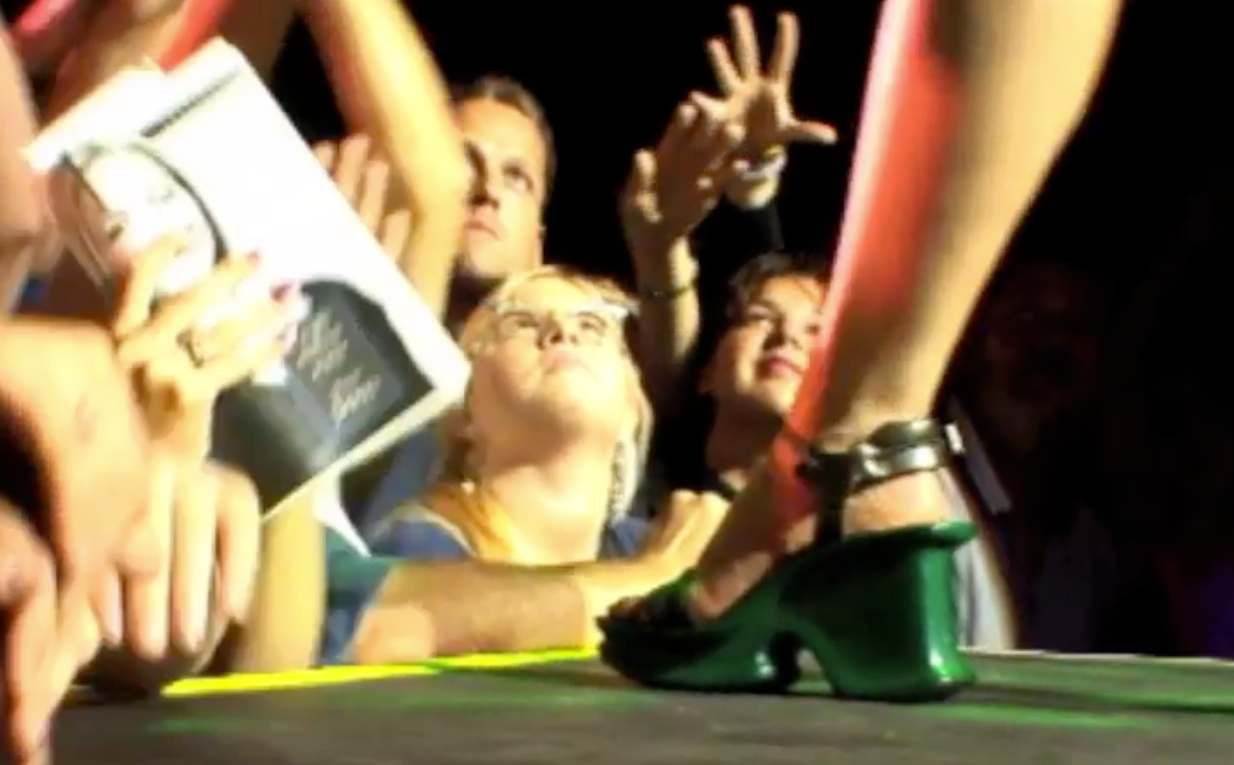 This happens to be the 50th of Jewel’s monthly features for EDAs everywhere.  For new folks joining us, the way that it works is on the first of each month we share something special with you. There is no set format, but it is often personal blogs from Jewel, free audio downloads, archival footage or unseen photography.

Up until recently access to these special features has been exclusive, requiring registration and a login, but moving forward this will no longer be the case.  The EDA’s have always been one of the friendliest and most inclusive online communities and likewise, these features will be accessible to everyone moving forward.  So instead of calling them EDA exclusives, I’m going with EDA inclusives from here on out.  The more the merrier!

That said, I’m here to share with you some previously unseen archival footage that is both unusual and extraordinary.  We’ll be going back almost 16 years, to August of 1999, when Jewel was deep into the world tour for her second album, Spirit, and coming to grips with stratospheric fame.

To put this in context, the first half of 1999 found Jewel primarily overseas with a full band on board, touring Australia, New Zealand, Singapore, Malaysia and Japan, followed by a few months performing throughout Europe.  During this time, Spirit would sail up the charts with “Hands” as the leadoff single and Jewel’s debut album would go 10x Platinum (surpassing 10 million copies sold!).  Her first book, A Night Without Armor, would become a staple of the New York Times bestseller list and media exposure in America would reach relentless proportions.  It was an exhilarating time to be sure, but not without new challenges.  Suffice it to say, when Jewel returned home to tour North America, EVERYTHING had escalated and intensified.

The video we’ll be sharing with you conveys the intensity of that era and will give you a unique view which relatively few have experienced up close.  Recorded on August 18, 1999 at The Riverport Amphitheater in Maryland Heights, Missouri, Jewel performs the Spirit album track, “Absence Of Fear,” accompanied by her keyboardist Steve George on piano.  It’s a lovely performance of the song, but equally compelling is the footage itself, shot by renowned photographer Darren Ankenman, then on board as tour videographer.  Darren was positioned at the base of the center stage catwalk, so he was directly in the thick of things, capturing the intensity level of the audience in the front row up close.  In fact he is so close, most of this video only has Jewel’s feet in it!

Intense, inspiring, funny and somewhat creepy, this footage provides a unique perspective on a dizzying era in Jewel’s career.  I also find it impressive to hear her stay so focused on this somewhat delicate song despite the intensity swirling all around her!  I recall many years ago asking Jewel what it felt like and she said something along the lines of being thankful that her fans remained so gentle and that it felt like little fish nibbling at her feet.

To make this more enjoyable on a musical level, I replaced the extremely distorted camera audio with a clean new multitrack mix.  Jewel’s performance is now clearly heard and free of the bulk of the audience screaming, although the intensity level remains obvious to see.

I should also point out that I'm not a foot fetishist, but to any reading this, “You’re welcome.”   And who knows?  Maybe you’ll see yourself way back when.  I’ve logged countless hours of tour video over the years, but this particular footage conveys so many things that I just felt compelled to share it with you.