Hi All,
This may be my most EDA-centric Inclusive yet, as this month I’d like to share some vintage EDA history with you that correlates directly with one of the most important performances of Jewel’s early career - and I’m not referring to Jewelstock, although its worth mentioning the 20th Anniversary of which was just a few weeks ago. For this Inclusive, we’ll be going back a little further than that; for something I'm confident will delight the most hardcore fans from way back when and newer fans alike.

For the benefit of everyone who came on board since that early era of Jewel’s career, allow me to share a couple of relevant things about those early days of 1995 into 1996 and the Jewel fans that began our vast EDA community. During that first year or so of the original Jewel (at smoe.org) listserv, which was a fan-run discussion list distributed via e-mail, one of the special ties that bound everyone together was a series of listmember-made cassette tapes that began documenting Jewel’s already prolific output. These tapes were primarily sourced from live walkman cassette recordings (InnerChange Days) or promotional items and Jewel’s visits to radio stations (Rare Angels, Radio Angels), while she was on the road promoting her debut album “Pieces Of You.”

Distributing these recordings was not a simple process back then, as many were just getting aquainted with being online and the only form of communication was e-mail via the listserv. Not to mention it was still the tail end of the analog era. Home CD burners and digital file sharing were not even options yet, but nearly everyone could play cassettes. These cassettes were freely distributed via “tape trees.” This required signing up online and snail mailing blank tapes and return postage to a volunteer EDA, who would then copy them and mail them back to you. Despite being a slow tedious process, this method of distribution got the job done free of charge. It also facilitated countless EDA friendships in the process, including many that continue to the present day.

While these initial tapes were popular and widely circulated, the early EDAs were still a relatively close knit group, so the tapes didn’t extend a reach much farther than that. Although the EDA numbers began growing more rapidly in early 1996, Jewel’s first album was still only selling modestly, online fan communication was limited to the e-mail listserv and no official web site existed. Jewel was, however, working her tail off, often doing multiple performances a day up until that point.

A lot changed in May of 1996, when Jewel hit the road with her first touring band. It wasn’t until then that she began headlining club shows (as opposed to coffeehouses, bars, schools, record stores and opening for other artists) for the first time. It was an exciting time to be sure and that tour would greatly expand the range of Jewel’s live performances, from folksinger to rocker girl. There were many memorable performances on that tour but no single performance would prove more important than on May 18, 1996, when Jewel hit the stage of The Paradise Rock Club in Boston.

Thanks in large part to WBCN DJ Carter Alan, who was one of the earliest east coast supporters of Jewel’s music, she enjoyed a relatively strong fanbase in the Boston area. The Paradise gig was one of the few on that tour to actually sell out in advance. In an effort to reach more fans, Atlantic Records agreed to allow The Paradise show to be broadcast live on WBCN FM.  Here are two photos from that night shot by Paul Kim, one of the original EDAs of that early era who attended that night. 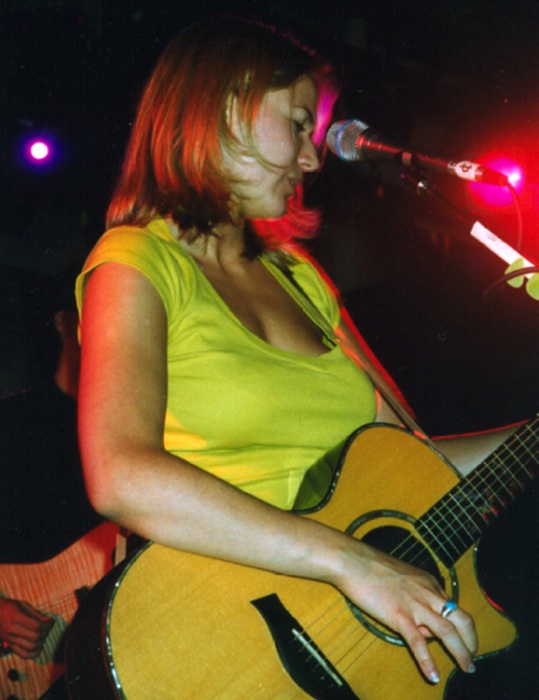 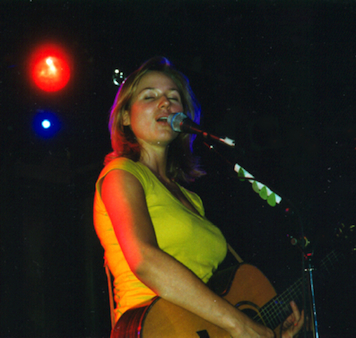 The WBCN broadcast was the first time an entire Jewel concert performance was transmitted on the radio; thus the first time fans had access to a complete concert recording in professional quality. Needless to say, it immediately became a primary staple of the early tape trading scene, but its reach would soon extend way beyond that.

Portions of the recording would subsequently be licensed to Westwood One, which would rebroadcast edited versions of the show on FM affiliates all across North America. Countless more people heard and recorded those broadcasts. For many, it was their first exposure to Jewel live, but even for existing fans, it was an eye opening experience, as it proved Jewel was capable of far greater range than a solo acoustic folksinger.

The high quality and all the unreleased songs meant that, inevitably, this recording would turn up on numerous illegally sold bootleg CDs. In fact, dozens of variations would hit the bootleg market over the next several years, but the EDAs made it their mission to thwart the bootleggers by continuing to share freely, even rejecting the term “bootleg” altogether and by calling unauthorized Jewel recordings “angelfood” instead.  In 1997, I provided a copy of the digital soundboard master to list members, so that EDAs could circulate the definitive version of this show.  It became the extremely popular cassette called “Jewel Rocks The Paradise.” It remains the best quality version of this show, as it was sourced from the original in-house master and was superior quality to any broadcast copy. Here is the original insert for that EDA cassette, copies of which are well worth tracking down from a friendly EDA if you don’t already have it. 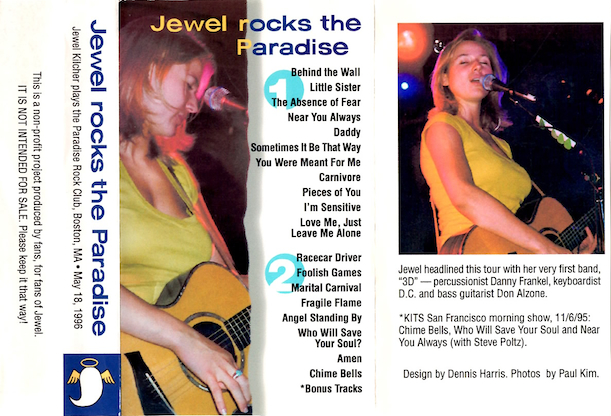 I would have to say that the Paradise recording is still likely to be the most widely circulated unreleased concert recording of Jewel’s career and it remains a favorite of many to the present day. Most of the songs may seem like staples now, but for most listeners at the time, this concert was their first exposure to songs like “Carnivore,” “Absence Of Fear,” “Love Me Just Leave Me Alone” and even “Sometimes It Be That Way” - none of which were officially issued at the time.

Now that you understand the context and significance of this particular show, I have a treat for you.  Awhile back, I was transferring a batch of old 8mm videotapes that were shot by Jewel’s friend Bibi Bielat, which included several from this era. There was one tape that had a broken shell and was simply marked “damaged.”  It had never been logged, so the content was unknown. Mysteries like these are exactly what compels me in life, so I dug up an old blank 8mm tape and cannibalized it in order to reshell the damaged one.  When I played it for the first time, I was pleasantly surprised to discover footage of Jewel at the 9:30 Club in Washington, DC on May 17, 1996 - the night before the legendary Paradise show.  After approximately 20 minutes, the footage changed and lo and behold, the remainder of the tape was indeed actual footage of the Paradise show.

Many of the songs were of a fragmentary nature and the camera audio was pretty lousy, but there was cool footage of several songs in their entirety and the audio was easy to fix. Of the complete songs, “Sometimes It Be That Way” caught my attention because not only was Jewel playing it on her iconic blue guitar (custom made by Danny Ferrington), I had completely forgotten that this song contained an additional verse back then. I also recognized a few (very young!) faces surrounding the stage, so if you were there, you might even see yourself two decades ago.